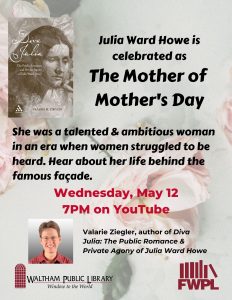 Julia Ward Howe is called the Mother of Mother’s Day, but her personal life was a bit of a mess. Tune in for some startling and somewhat sensational details about her life.

In her book, Diva Julia: The Public Romance and Private Agony of Julia Ward Howe, author Valarie Ziegler contrasts Howe’s public image with the private struggle she endured as an ambitious woman trapped in a confining and desperately unhappy marriage. Her husband, Samuel Gridley Howe, is still revered in Boston for founding the Perkins School for the Blind, where he developed methods that allowed two blind and deaf girls (Laura Bridgman and Helen Keller) to be famously educated. In his marriage, however, Samuel was controlling and insisted that his wife confine herself to the home. But Julia was an intellectual who loved to write, and she eventually emerged as a leading author and political reformer of the nineteenth century—to Samuel’s fury. She wrote poetry, plays, and a daring novel exploring the life of a hermaphrodite. In 1862, Julia earned national renown after penning “The Battle Hymn of the Republic.” A decade later, she invented the original Mother’s Day as an occasion to work for world peace. Her home life, however, remained tumultuous, since Samuel regarded all her work as “contemptible or contra band.” When Samuel died in 1876, Julia spent the next 34 years championing woman suffrage, traveling the country (now to her grown children’s horror) on behalf of women’s rights