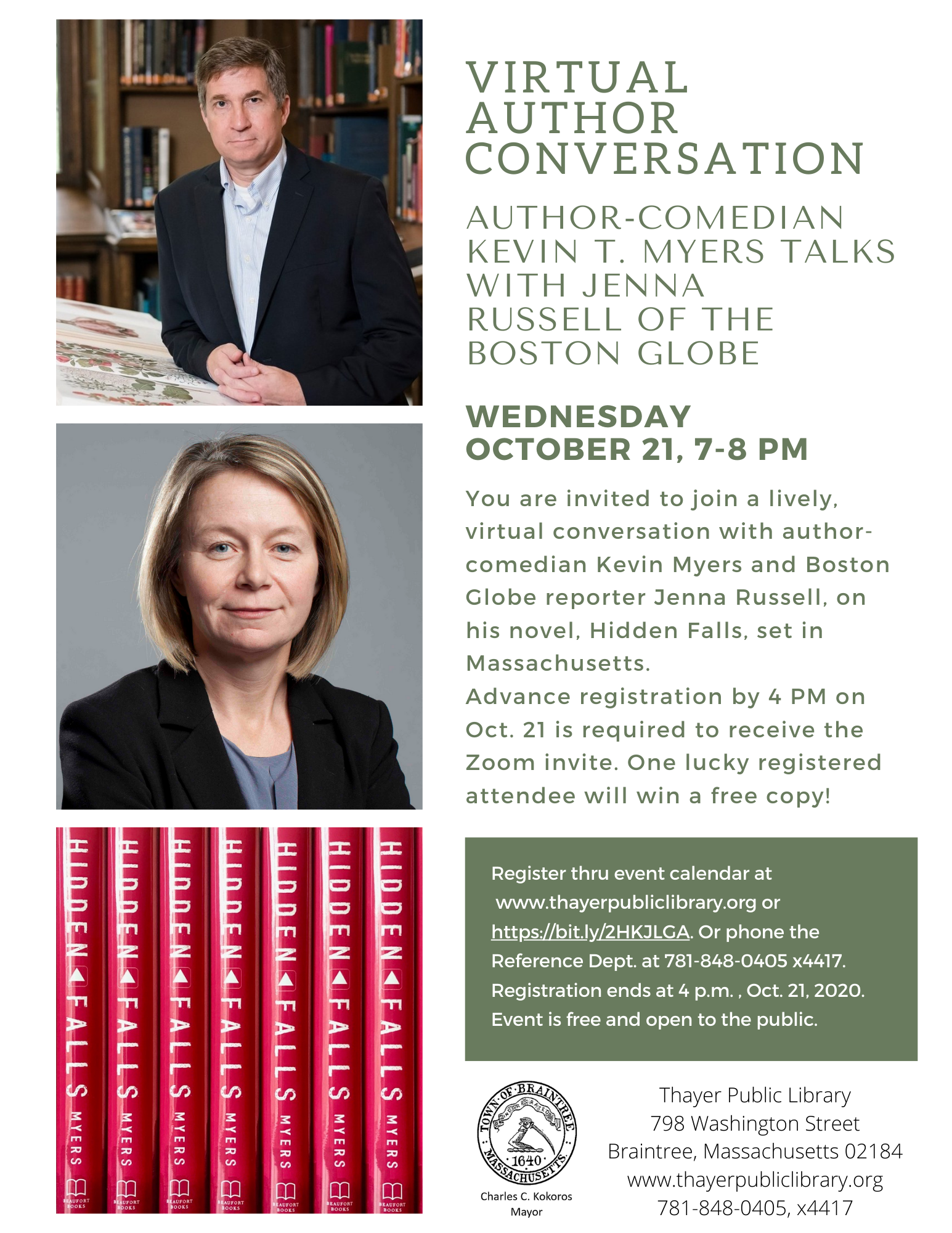 This virtual event is free. Registration by 4 p.m. on the day of the event is required to receive the Zoom invite: https://www.eventkeeper.com/code/ekform.cfm?curOrg=THAYER&curID=466649

One lucky registered attendee will win a free copy from the publisher!

A middle-aged newspaper columnist, Michael Quinn is not well equipped for his odyssey through New England’s dangerous underworld. In fact, he isn’t well equipped for much. Returning to Boston from Portland, Oregon after his father dies unexpectedly, Michael inherits some unfinished family business that places him as the unwitting linchpin in a major criminal conspiracy.

“Hidden Falls is like Dennis Lehane and David Sedaris got together to write a book. It’s intelligent, charming and the perfect combination of thrilling and funny. It’s a must read!” — Judd Apatow, writer and director of The 40-Year Old Virgin (co-written with Steve Carell)

Kevin Myers proudly hails from Peabody, Massachusetts. He is a former stand-up comic and comedy writer. He has appeared on the Comedy Channel and was featured on 20/20. His jokes have been told at colleges, clubs, on the Tonight Show, and on Broadway. His essay “The Power of Compassion” aired nationally on NPR’s “This I Believe” series. He has worked as a journalist and editor in newsrooms from New Hampshire to Alaska, where he ran the Capital City Weekly. He is currently the spokesperson for Reed College in Portland, Oregon.

Jenna Russell is a reporter at the Boston Globe. She is a contributor to award-winning Globe projects including “68 Blocks: Life, Death, Hope,” based on a year of reporting in a Boston neighborhood, Jenna Russell is a co-author of two Globe books: “Last Lion,” a biography of Sen. Edward M. Kennedy, and “Long Mile Home,” about the Boston Marathon bombing. As a member of the Spotlight investigative team, she helped expose failures of the state’s mental health care system, work that was recognized as a Pulitzer Prize finalist in 2017.