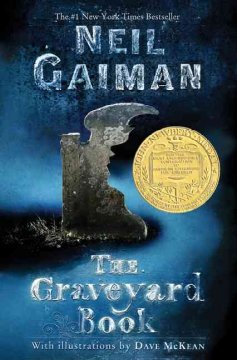 When: Thursday, October 28th at 2PM

After the grisly murder of his entire family, a toddler wanders into a graveyard where the ghosts and other supernatural residents agree to raise him as one of their own.

“Somewhere in contemporary Britain, “the man Jack” uses his razor-sharp knife to murder a family, but the youngest, a toddler, slips away. The boy ends up in a graveyard, where the ghostly inhabitants adopt him to keep him safe. Nobody Owens, so named because he “looks like nobody but himself,” grows up among a multigenerational cast of characters from different historical periods that includes matronly Mistress Owens; ancient Roman Caius Pompeius; an opinionated young witch; a melodramatic hack poet; and Bod’s beloved mentor and guardian, Silas, who is neither living nor dead and has secrets of his own. As he grows up, Bod has a series of adventures, both in and out of the graveyard, and the threat of the man Jack who continues to hunt for him is ever present. Bod’s love for his graveyard family and vice versa provide the emotional center, amid suspense, spot-on humor, and delightful scene-setting. The child Bod’s behavior is occasionally too precocious to be believed, and a series of puns on the name Jack render the villain a bit less frightening than he should be, though only momentarily. Aside from these small flaws, however, Gaiman has created a rich, surprising, and sometimes disturbing tale of dreams, ghouls, murderers, trickery, and family.” School Library Journal Review, October 2008