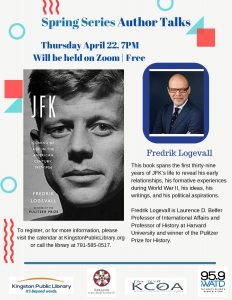 John F. Kennedy’s meteoric rise to become the youngest elected president cemented his status as one of the most mythologized figures in American history. While hagiographic portrayals of his dazzling charisma, reports of his extramarital affairs, and disagreements over his political legacy have come and gone since his death, these accounts all fail to capture the full person. In JFK: Coming of Age in the American Century, 1917-1956, Pulitzer Prize winning historian, Fredrik Logevall, fills in this gap in our historical knowledge.

Mr. Logevall has spent much of the last decade searching for the “real” JFK and the result of this prodigious effort is a sweeping two-volume biography that properly contextualizes Kennedy amidst the roiling American Century. This volume spans the first thirty-nine years of JFK’s life to reveal his early relationships, his formative experiences during World War II, his ideas, his writings, and his political aspirations. It is a sweeping history of the United States in the middle decades of the twentieth century, as well as the clearest portrait we have of this enigmatic American icon.

Fredrik Logevall is Laurence D. Belfer Professor of International Affairs and Professor of History at Harvard University. His book Embers of War: The Fall of an Empire and the Making of America’s Vietnam, won the Pulitzer Prize for History as well as the Francis Parkman Prize, the Arthur Ross Award, and other prizes.

A Zoom link to attend this Author Talk will be sent in a confirmation email after registration.