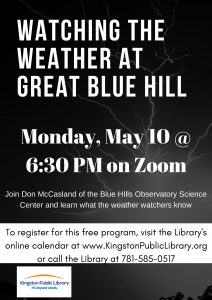 Mark Twain once remarked, “If you don’t like the weather in the New England now, just wait a minute.” The folks from the Blue Hills Observatory may have a slightly more nuanced view on the subject. Watching the Weather at Great Blue Hill will feature photos of the Observatory and how it changed between 1885 and 1908, weather instruments from the 19th, 20th and 21st century, the observed trends and how they relate to climate observations around the world and stories about some of the more challenging days at the Observatory. There will also be plenty of time for Q&A.

This program will be on Zoom, May 10 at 6:30 PM and is presented by Don McCasland, Program Director Blue Hill Observatory Science Center.

Mr. McCasland grew up in Foxboro watching his father check the thermograph every morning. In fact, a fascination with weather is in Don’s blood. His parents met while his father worked at Blue Hill Observatory in the 1940s. Mr. McCasland began at the Observatory in 1999 teaching kite making when the Science Center opened and eventually became the Program Director.